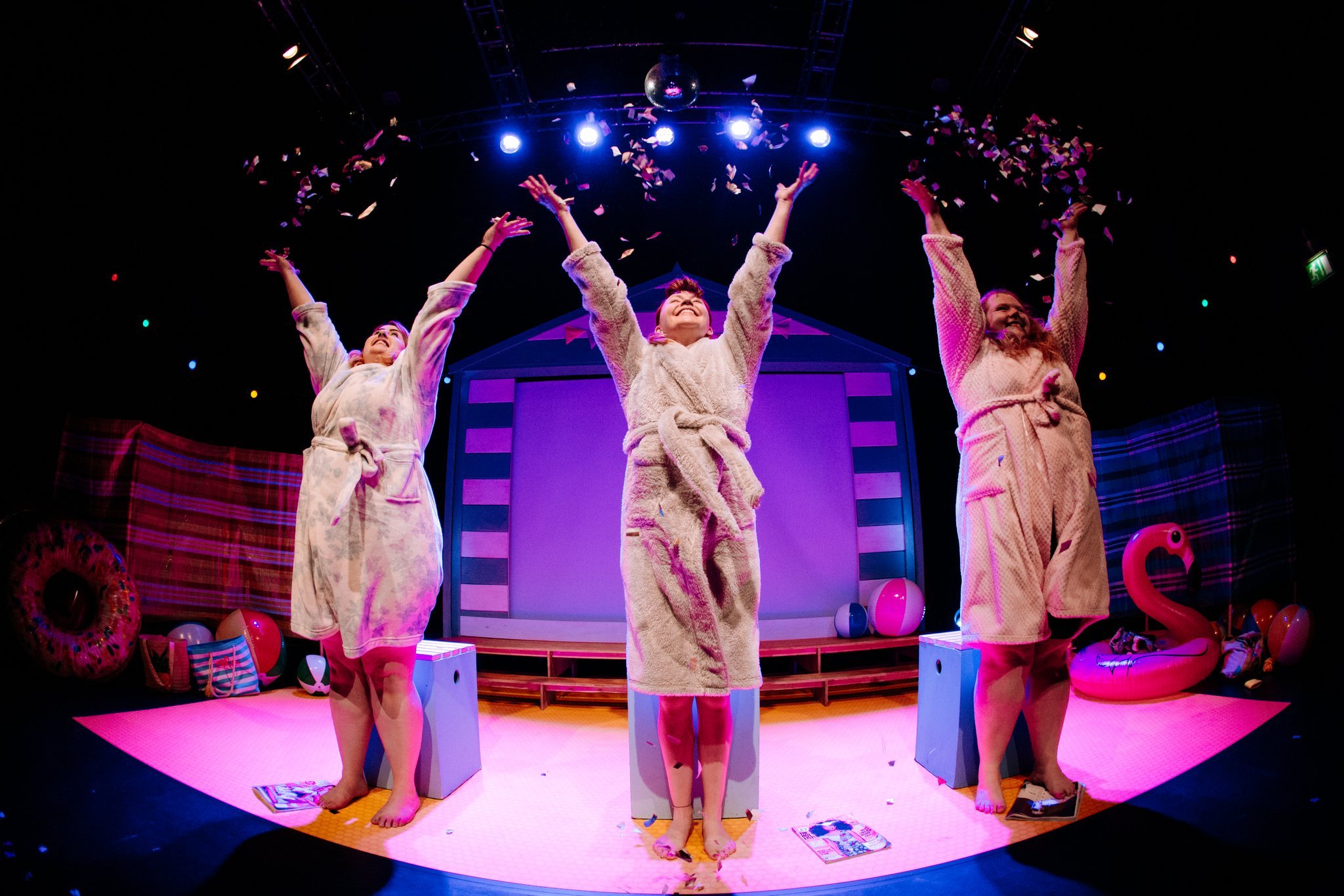 Five theatre companies were part of the Hull Takeover at the Edinburgh Festival Fringe this summer;

The Hull Takeover 2019 was produced by Absolutely Cultured through their Hull Independent Producer Initiative in partnership with Middle Child, supported by Hull Truck Theatre and Back To Ours;

Theatre companies from Hull returned to the Edinburgh Festival Fringe in August as Absolutely Cultured, in partnership with Middle Child, supported by Hull Truck Theatre and Back to Ours, supported shows by five highly acclaimed and exciting theatre companies. Preview events in Hull also gave local audiences a chance to see the work before they transferred to the festival.

The Herd, The Roaring Girls, Casus Circus, Middle Child and Just Club took their shows to the Fringe and were greeted with five-star reviews in national media and trade press, sold out shows, award nominations and celebrity audience members.

Reviewers from The Guardian described Middle Child’s The Canary and the Crow as ‘a vibrant schooling in identity issues’ and The Stage called The Roaring Girls Beach Body Ready ‘a buoyant, honest and often moving show’. In their round-up of reviews the Daily Mail described Casus Circus’ DNA as ‘the very epitome of skill, strength discipline and grace’.

The Hull Independent Producers Initiative supports and develops Hull’s performing arts sector through training and mentoring, along with championing emerging theatre companies living and working in the city.

This was the second Hull Takeover at the Edinburgh Festival Fringe following the success in 2017, where the Hull-based companies scooped accolades and received praise across the national media. It was here that Hull theatre company Silent Uproar performed their show A Super Happy Story (About Feeling Super Sad), which has gone on to receive rave reviews everywhere it has performed on its current tour, and Middle Child sold out the Paines Plough Roundabout at Summerhall with the multi-award winning All We Ever Wanted Was Everything, which later transferred to the Bush Theatre in London. 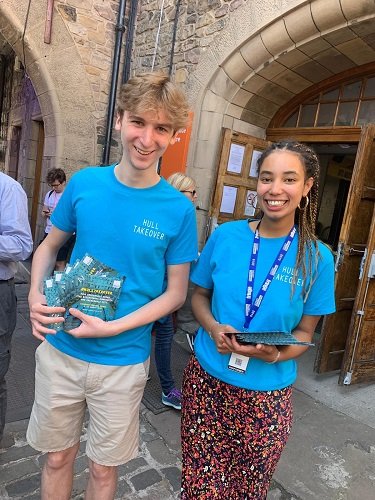 Lindsay Stockley, Senior Producer at Absolutely Cultured, said: “We’re delighted with this year’s Hull Takeover, it has really shown the importance of having a collective voice shouting about Hull and the city’s creativity. There is a camaraderie that resonates across these companies and I’m sure the relationships they have built and experiences they have shared will benefit them in their future work.

The Canary and the Crow marked another successful trip to Edinburgh for Middle Child, who won the Brighton Fringe Award for Excellence, alongside nominations for three other prizes, including a prestigious Total Theatre Award.

The show was enjoyed by sold out audiences and also picked up rave reviews across the theatre press. Middle Child are now planning a tour of the show in 2020, off the back of their Fringe success.

Middle Child’s artistic director Paul Smith, said: “This year’s Hull Takeover at the Edinburgh Festival Fringe has been yet another huge success for local artists, many making the trip for the first time, and doing so with the support and encouragement of their fellow artists as well as the project partners.

“The sell out crowds, awards and nominations and glowing reviews lavished on these performances proves that supporting Hull-based artists at the Fringe can reap the rewards.

“These fantastic companies have shown the world that our city is a hotbed for groundbreaking theatre that challenges and entertains audiences and we couldn’t be more proud.”

Formed by University of Hull graduates, founding members and best mates, Jamie Nowell, Matthew Collins and Jake Marsden, Just Club was established in Hull in 2018. The Hull Takeover saw the company take their first ever show, Standing Too Close on Our Own in the Dark, to the Paines Plough Roundabout at Summerhall for one night only.

This gig-theatre event which is as vibrant and hopeful as it is melancholic, is part stand-up, part gig and part spoken word ramble, which sees its performer pour over a journal of original poetry and comedic monologue, with encouragement from a live band.

Slime was The Herd’s first Fringe outing, selling well across the run to lots of Scottish families and festival goers from around the world alike. The company received their first reviews from national media including 4 stars from The Stage along with being picked as a Guardian recommended show. They were also shortlisted for the Venues North Edinburgh Fringe Award. The Herd will be taking Slime on a small tour this autumn with further performances planned in 2020.

Beach Body Ready by The Roaring Girls became one of the most talked about shows at the Fringe with brilliant (mostly 4 and 5 star) reviews and audience acclaim. The Guardian described the show as ‘engaging, funny and inclusive’ and put it in their list of top recommended Fringe shows. The Stage said it was ‘buoyant, funny and often moving’. Amongst the audience comments was comedian Lenny Henry who enthusiastically tweeted ‘Beach Body Ready – a corking show’. As well as BBC Radio Humberside and BBC TV’s Look North, The Roaring Girls were also featured on Radio 5Live, BBC World Service and a German TV news programme. What’s On Stage magazine selected the show as one of their top 12 to see before the Fringe and The List called it a ‘stunning piece of theatre’. They were invited to perform an excerpt on Mervyn Stutter’s ‘Pick of the Fringe’ show.  The buzz around the show in Edinburgh was palpable with considerable numbers of promoters and industry figures seeing the show which augers well for the company’s hopes of taking it on tour in the UK and internationally.

Originating from Brisbane, Australia, Casus Circus took its Back to Ours co-commissioned DNA to the festival. Casus is recognised as a leader in contemporary circus on the international stage, and DNA is a show of physical theatre in which the acrobats explore, wrestle and nurture their real-life stories.

Performing through an array of emotional, humorous and dangerously skillful moments, the Casus Circus acrobats fill the stage with momentum and stillness, strength and fragility, creating an enthralling ballet of acrobatics.

Louise Yates, Back to Ours Director, said: “Hull absolutely smashed it at Edinburgh Fringe this year!

“To have two shows – Beach Body Ready and The Canary and The Crow – on the British Council-recommended 2019 shows, and four- and five-star reviews across the board; that’s a huge achievement and cements us as leaders in vision and creativity.

“Bringing our co-commissioned show DNA by Casus Circus to the Hull Takeover also puts us on a global stage, cementing international relationships and exciting new collaborations. We’re so excited to see what happens next…”

Mark Babych, Artistic Director at Hull Truck Theatre, said: “Hull Truck Theatre was delighted to support the Hull Takeover, which was an important opportunity to show an international audience just what outstanding theatre is being made in Hull. Local audiences had the chance to preview the shows at our Grow Festival in July, and we knew from their response that the shows would be popular in Edinburgh. Even so, the public and media response has been incredible and has reiterated the message of Hull 2017 that we are a great cultural city.”

Three of the visiting companies – The Herd, Just Club and The Roaring Girls – received financial support from Absolutely Cultured. In addition all companies benefited from in-kind support including PR, marketing and producing from Absolutely Cultured as well as wellbeing support from Middle Child. The Herd, Middle Child, Roaring Girls, and Just Club were also supported by Hull Truck Theatre to preview their shows before the festival as part of their ‘Grow’ season and benefitted from the peer support they provided each other. Additionally, The Herd and The Roaring Girls were and continue to be Hull Truck Theatre supported artists. Both Middle Child and Casus were able to offer the benefit of their previous successful experiences at Edinburgh fringe to the other companies in the Takeover programme.