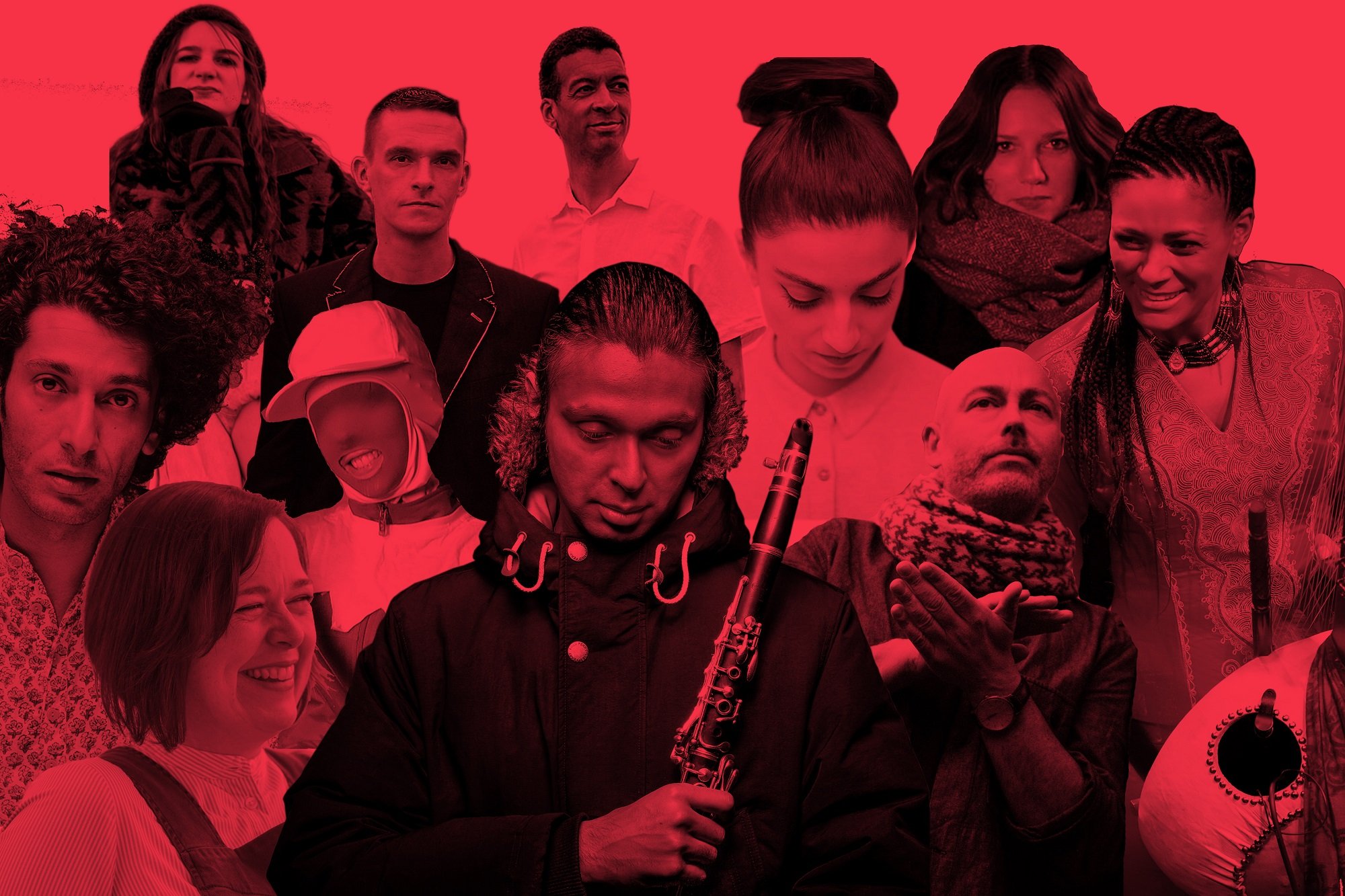 A celebration of new music from the UK’s most talented composers and musicians, the New Music Biennial — a PRS Foundation initiative presented in partnership with Absolutely Cultured (Hull), London’s Southbank Centre, BBC Radio 3 and NMC Recordings — presents a unique snapshot of contemporary music in the UK across all genres from classical to world music, jazz, folk, electronic and music for ice cream vans.

Across both weekends works are performed in a range of venues, inviting audiences to discover new music in an interactive way, both in and outside of traditional concert hall settings. Venues at Southbank Centre include Queen Elizabeth Hall, Purcell Room, Royal Festival Hall and Queen Elizabeth Hall foyer spaces and outdoor spaces. In Hull, New Music Biennial happens across a diverse range of the city’s best venues from City Hall to Hull Truck Theatre, Humber Street Gallery to the first event after Fruit’s refurbishment not to mention Nelson Street Pier, The Guildhall, Hull Central Library and more. Each bite-sized piece, lasting 15 minutes, is performed at least twice enabling audiences to see and hear all the winning compositions across the weekend.

This year sees the festival return to Hull as part of the legacy of the New Music Biennial 2017 which was in partnership with Hull UK City of Culture 2017, and follows the successes of its inaugural festival in 2014 and Cultural Olympiad programme, New Music 20×12. All New Music Biennial commissions receive public performances at London’s Southbank Centre on 5 – 7 July 2019 and Hull on 12 – 14 July 2019, broadcast on BBC Radio 3 plus available as a download by NMC Recordings following the festivals.

Highlights of the festival weekends include:

Sona Jobarteh – Innovation Through Preservation
Commissioned by Yaram Arts
Sunday 7 July, 6:30-7:30pm, Southbank Centre’s Purcell Room, free Friday 12 July, 9 – 10pm, Fruit, Hull, free
Sona Jobarteh is the first female Kora virtuoso to come from a west African Griot family. Breaking away from tradition, she is a pioneer in an ancient male-dominated hereditary tradition that has been exclusively handed down from father to son for the past seven centuries. This commission will integrate West African and European instrumental interpretation; instruments will be paired together in likeness in a unique arrangement that will explore and challenge the capabilities of the instruments from both traditions.

Sarah Tandy – The Dream Without A Name
Commissioned by J-Night
Saturday 6 July, 7:00-8:00pm, Southbank Centre’s Queen Elizabeth Hall Foyer, free Saturday 13 July, 10:00 – 11:00pm, Fruit, Hull, free
As one of the key figures of the Harlem Renaissance, Langston Hughes was writing at a time when a city was experiencing a unique moment in its cultural history. His writing has helped to shape the identity of jazz in the popular consciousness. For this piece, some of his ideas about music, love and city life will be explored within the musical context of the UK scene, where many aspects of that traditional jazz mythology are being creatively re-interpreted, and the pioneering spirit continues to thrive in diverse city environments.

A full schedule of times and locations for Music for Seven Ice Cream Vans will be released nearer to the time. For updates, please visit the Absolutely Cultured website.

Roderick Williams – Three Songs from Ethiopia Boy
Commissioned by Chineke!
Sunday 7 July, 7:30-8:30pm, Southbank Centre’s Queen Elizabeth Hall, free Sunday 14th July, 3 – 4pm, Hull City Hall, free
Better known to some as a baritone soloist, Roderick Williams’ reputation as a composer is growing steadily. His Advent antiphon O Adonai has become something of a favourite for choirs on both sides of the Atlantic and his Ave Verum Corpus Re-imagined was awarded the BASCA prize for Choral Composition in 2016. The commission scored for voice and orchestra, and featuring Roderick as soloist, features text taken from Chris Beckett’s poems about his upbringing in Ethiopia and will be a significant new work which Chineke! plans to tour in future jazz-inspired programmes.

Claire M Singer – gleann ciùin
Commissioned by London Contemporary Orchestra
Friday 5 July, 6:30 – 7:30pm, Southbank Centre’s Queen Elizabeth Hall, free Sunday 14 July, 11:00am – 12:00pm, Hull University Chapel, free
* Please note: There will be coach transport provided between this and Arun Ghosh performances for those attending both in Hull* Claire M Singer is a composer, producer and performer of acoustic and electronic music, film and installations. Recipient of the inaugural Oram Awards from PRS Foundation and New BBC Radiophonic Workshop in 2017, she incorporates the aesthetic of electronics created purely through acoustic means. Known for her experimental approach to organ, she collaborates with leading musicians from the London Contemporary Orchestra in a new work for organ and mixed ensemble, revealing a rich world full of shimmering overtones, resounding bass drones and bittersweet dissonances. Following the New Music Biennial the work will tour the UK.

Edmund Finnis – The Centre Is Everywhere
Commissioned by Manchester Collective
Saturday 6 July, 4:30 -5:30pm, Southbank Centre’s Purcell Room, free Sunday 14 July, 1:45 – 2:45pm, Fruit, Hull, free
The UK premiere of a piece for string ensemble, The Centre is Everywhere is a starkly original work, described by Music Director Rakhi Singh as “something beautiful and strange, a music of close whispers and myriad reflections”. The Centre is Everywhere brings together Finnis’ exquisite sonic language with the work of one of Britain’s most exciting young ensembles, Manchester Collective. Edmund Finnis has composed intimate music for soloists and duets, immersive electronic pieces, music for film, ensemble music and works for large orchestra. His music has been hailed as ‘magical’ (The Times) and ‘iridescent, compelling’ (The Guardian). Manchester Collective produces innovative and outward-facing musical experiences for new audiences across Britain.

Forest Swords and Immix Ensemble – Trespassing
Commissioned by Metal Liverpool
Friday 5 July, 9:00-10pm, Southbank Centre’s Queen Elizabeth Hall, free Friday 12 July, 10:00 – 11:00pm, Fruit, Hull, free
Having achieved critical acclaim for his trio of releases, Dagger Paths, Engravings and Compassion, and subsequently toured the world to capacity audiences, Forest Swords attention has shifted towards the creation of more bespoke, multidisciplinary practice. He will work alongside the team at Metal, and Erased Tapes’ signees Immix Ensemble to develop Trespassing. This work will be a conceptual work exploring the ‘future sonic landscape of cities’, a deviation from his typical points of inspiration rooted in the ancient past. This 15 minute work will be performed by Forest Swords and the ensemble, made up of 6 ‘world class’ traditional instrumentalists.

Klein – Osanle
Commissioned by Qu Junktions
Friday 5 July, 8:00-9:00pm, Southbank Centre’s Purcell Room, free Saturday 13 July, 12:00 – 1:00pm, Hull Truck Theatre, free
Osanle is a new 15 minute drama – dance piece on dance and lineage, looking at the iconography of ballet through the eyes of three teenage boys. The cast will consist of teenage boys with no prior experience of ballet or dance performance. Directed and Music by Klein. Choreography by Klein and Scout Creswick. Costume by Amie Fasuluku. Set design by Club Couture and Overt Corporation.

Aidan O’Rourke, Kit Downes and James Robertson – 365
Commissioned by Edinburgh International Book Festival
Saturday 6 July, 12:00 – 1:00pm, Southbank Centre’s Purcell Room, free Friday 12 July, 5:15 – 6:15pm, James Reckitt Room, Hull Central Library, free
Words, music, the disarming drama of stripped-back storytelling. One of Scotland’s most celebrated authors, James Robertson wrote a story every day for a year, each exactly 365 words. What began as an exercise became a valued ritual and a captivating collection of tales, from the supernatural to the philosophical. Leading musician Aidan O’Rourke, fiddler of folk supergroup Lau, applied the same discipline to composition: a tune a day in response to Robertson’s stories. Now, alongside pianist and harmonium player Kit Downes, a heavyweight of the European jazz scene, they have created a piece weaving together their words and music referencing old myths, folk legends, everyday lives, hard truths, tender tales, and the alchemic power of storytelling.

Sam Eastmond – Brit-Ish
Commissioned by JW3
Sunday 7 July, 2:30-3:30pm, Southbank Centre’s Purcell Room, free Sunday 14 July, 5:15 – 6:15pm, Hull Truck Theatre, free
Brit-Ish is a pun. Brit in Hebrew means covenant/partnership, and Ish means Person. At a time when nationalism and ethnic identities are being placed into opposition, this project explores what it means to have a hyphened identity in 21st century Britain. An identity that is a partnership of Jewish heritage and British culture. With all the complexities of coming from a community that has been here since medieval times, and yet are often identified as immigrants. This project forges a new diasporic Jewish identity with a piece of music informed by diverse Jewish legacies infused with a contemporary sensibility performed by Eastmond’s Spike Orchestra.

9Bach – Yn dy Lais – In Your Voice
Commissioned by FOCUS Wales
Saturday 6 July, 9:00 -10pm, Southbank Centre’s Purcell Room, free Sunday 14 July, 8:00 – 9:00pm, Fruit, free
Alternative Welsh folk group 9Bach (Realworld) , winners of Best Album at the BBC Radio 2 Folk Awards for TINCIAN, will collaborate with actress Maxine Peake and acclaimed drummer Andy Gangadeen to explore miscommunication and misinformation in a bilingual, multimedia, and genre defying piece. Andy is a well-known Musical Director and session musician having worked with musicians as varied as Massive Attack, Chase and Status and Jeff Beck, he is also the brains behind The Bays. Andy has been brought in to add an electronic slant to the bands distinctive and evocative sound. The composition will contain words sung in the Welsh language, and Maxine will voice a spoken word piece in English, which will be an interpretation or feel of the Welsh lyrics meaning. This will be a specially recorded video that will synch with 9Bach’s live performance.

David Fennessy – Panopticon
Commissioned by Psappha and Hebrides Ensemble
Sunday 7 July, 11:00am-12:00pm, Southbank Centre’s Purcell Room, free Sunday 14 July, 4:00 – 5:00pm, Mortimer Suite, Hull City Hall, free
The cimbalom governs the string ensemble in a new work by David Fennessy, performed by Psappha. Every attack on the string of the instrument has a consequence on the rest of the players. Each beat triggers a ripple, much like a stone dropped into a still lake, which eventually reaches the strings: they reflect and magnify its effects. The cimbalom also governs pulse and dynamic and, through its careful exploration of the natural harmonics available on its lowest string, plots the entire course of the piece. The word ‘panopticon’ is usually associated with an 18th-century design concept for a circular prison. Cells were arranged around a central well, from which prisoners could be observed at all times.

Rolf Hind – Tiger’s Nest
Co-commissioned by Cheltenham Music Festival and the Southbank Centre, with the support of the Britten-Pears foundation
Sunday 7 July, 3:30-4:30pm, Southbank Centre’s Queen Elizabeth Hall, free Sunday 14 July, 6:45 – 7:45pm, Hull Truck Theatre, free
This will be the London premiere of Rolf Hind’s Tiger’s Nest for Southbank Gamelan Players and soloists (two prepared pianos and percussion). Rolf Hind has worked closely with living composers across a broad range of styles: from John Adams and Tan Dun, to Ligeti and Lachenmann; Xenakis and Messiaen, to Simon Holt and Judith Weir. He appears regularly at new music festivals throughout Europe and he is in demand as a soloist. Further afield he has made numerous appearances: including with the Danish Radio Symphony Orchestra, Baltimore Symphony Orchestra, and others.

Numb Mob – Where to Build in Stone
Commissioned by Serious
Saturday 6 July, 8:00-9:00pm, Southbank Centre’s Queen Elizabeth Hall, free Saturday 13 July, 8:30 – 9:30pm, Fruit, Hull, free
Where to Build in Stone is inspired by the shapes and sounds of the city of Hull, originally commissioned by J-Night for Hull Jazz Festival 2017. Performed with a variety of electronic and acoustic instruments, the piece is a vivid soundscape embroidered with evocative melodies that evoke a mysterious and oddly beautiful side of the city. The visual counterpart explores Hull over the course of a day, telling the story of the city through the things that are everywhere and overlooked; the familiar seen from an unfamiliar perspective. Music by Numb Mob, film by Joseph Bird.