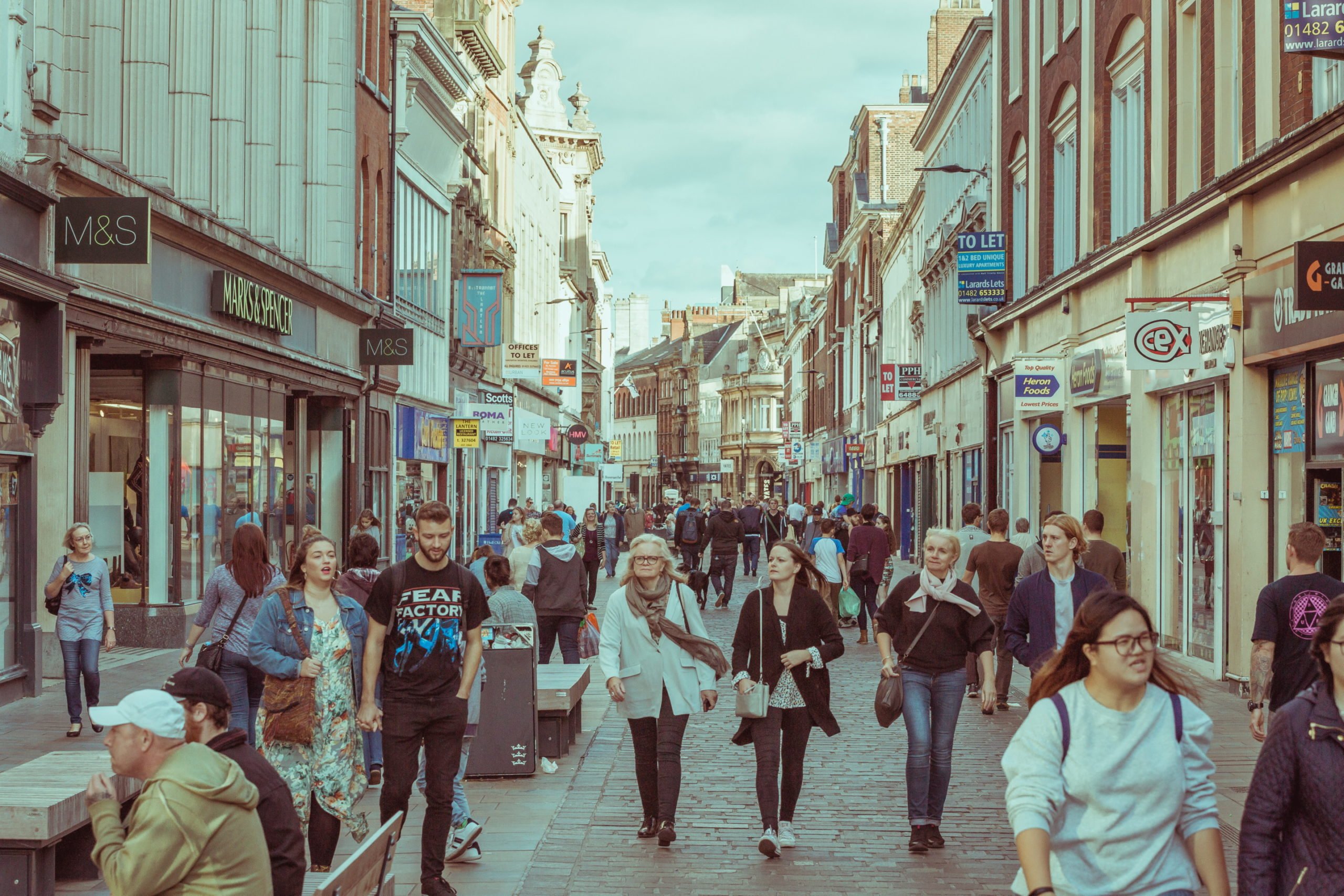 This is part of the four-year-long High Streets Heritage Action Zones’ Cultural Programme, led by Historic England, in partnership with Arts Council England and the National Lottery Heritage Fund. The Cultural Programme aims to make our high streets more attractive, engaging and vibrant places for people to live, work and spend time. Operating across over 60 high streets (and online), it is the widest-reaching, community-led arts and heritage programme in the public realm that has ever been organised, and is the biggest ever community-led arts and heritage programme celebrating the high street. The £95 million High Streets Heritage Action Zones scheme is the biggest ever single investment by Government in the UK’s built heritage.

Duncan Wilson, Chief Executive, Historic England, said: “The High Streets Cultural Programme is an essential part of the way we are contributing to bringing high streets back from the brink. As we start to see these important historic spaces become regenerated through conservation and building work, the community-led cultural activity programme will bring people back to enjoy their high street again and have a say in its future.”

Each high street taking part in the Heritage Action Zones scheme has been awarded grants of up to £120,000 to fund cultural activity. These include:

Middlesbrough (North East) – £119,740 grant
The Celebrating Hidden Middlesbrough programme will uncover how buildings, industries, people and communities have influenced the broader culture of the town and might offer alternative ways to think about the high street now. The programme will include four public art commissions, two artist residencies and one further artist commission, resulting in a range of artworks, a film and research material. The consortium is made up 21 local cultural and architectural organisations, led by Navigator North CIC.

Buxton, Spring Gardens (Midlands) – £100,000 grant
In Buxton, members of local youth theatres and choirs, as well as students from the town’s secondary schools, will sit on a youth panel to advise on activity, with a quarter of funding reserved for young people’s programming. In the first year, the panel plan to create an exhibition of “portraits of the high street past and present”, using empty shop windows, street flags and digital displays. This will run alongside a range of events and activities that will draw communities together and work from local, established and emerging artists will add to the programme. The consortium is made up of 12 organisations led by Buxton Crescent Heritage Trust.

Great Yarmouth, King Street (East of England) – £120,000 grant
Artists and local communities will work together to explore the unique character and heritage of Great Yarmouth. As well as the history of the high street, the programme will also celebrate Great Yarmouth as a historic and nationally significant centre for circus and entertainment. A year-round programme of creative workshops, heritage learning and skills development will feed into shop window exhibitions along King Street, and performances around the town’s historic Rows, St. Nicholas School and Market Place. The consortium is made up of seven organisations led by arts organisation Out There Arts.

Newport, Isle of Wight (South East) – £90,000 grant
From a children’s festival, a public art project, art exhibitions, museum displays, heritage talks to a rolling programme of concerts and workshop, Renew Newport cultural programme will offer a transformative programme of culture-led regeneration. The consortium is made up of eight organisations led by cultural charity Independent Arts.

Harlesden (London) – £100,000 grant
The Harlesden Gateway Cultural Programme reflects the high street’s richly diverse community. Harlesden’s local histories are on show in a programme that will capture the heritage and memories of community elders, as well as looking to more recent arrivals in the community. A core youth group will work with creative facilitators to shape and deliver the programme, providing workshops and learning activities for community participants as well as hosting public and online events and activities. The consortium is made up of 10 organisations led by the Young Brent Foundation.

Weston-super-Mare (South West) – £119,690 grant
21st Century super Shrines is an exciting programme co-created by professional artists in partnership with local emerging artists and communities for which a series of innovative contemporary ‘shrines’ will appear on the high street. These shrines may be permanent installations or live arts experiences. Together, the shrines will create a sense of shared values, determining a new sense of ‘worth’ on the high street. The consortium is made up of 11 organisations led by Culture Weston.

The funding builds on the success of a series of pilot cultural projects that have run since last August across 43 High Streets Heritage Action Zones. From Selby high street offering interactive workshops for young gamers to help ‘build’ Selby Abbey in Minecraft, to people in Weston-super-Mare gathering memories of the town, to an installation in Middlesbrough that shone a light on the town’s motorbiking culture, they have not only helped high streets offer cultural activity during lockdown, but also test what local people would like to see happening on their high streets.

A SUMMER OF CULTURE

As well as the grant-funded cultural activity taking place on high streets over the next three years, Historic England is also curating a programme of cultural commissions to get people back to high streets:

Historic England, the National Trust and Heritage Open Days have commissioned Sound UK to create a series of new ‘High Street Sound Walks’ available on six High Streets Heritage Action Zones that will be launched as part of Heritage Open Days (10-19 September). The walks are each co-created with local artists – or artists with a connection to each place – and the community, in association with local arts organisations. The result will be distinctive, immersive soundscapes to inspire people to look again at their high streets.

1. Redruth: Anna Maria Murphy, Sue Hill and Ciaran Clarke will explore the layers of time to unlock the fascinating strata of sound, voice and story within Redruth high street. Their sound walk will represent the broad spectrum of people and experience of the town. Produced in association with Carn to Cove.
2. Reading: Aundre Goddard and Richard Bentley will combine music, audio drama and outdoor museum spaces. At its heart is London Street’s community, and its narrative will be interwoven throughout the piece. Listeners will be taken on a dream-like journey through time. Produced in association with CultureMix, Readipop and reading Borough Council.
3. Barrow-in-Furness: Dan Fox will embrace the diversity of people in Barrow. He will explore the changes it has witnessed such as when Barrow’s high street had 12,000 ship workers descend on it at lunchtime. Listeners will explore the landmarks of work and play on the high street including iconic shops, businesses and the clubs of Cornwallis Street, alongside civic events like cycle races, and the centenary of the town hall. Produced in association with Full of Noises.
4. Hull: Jez Riley French will explore the positive sub-culture histories of Whitefriargate within living memory. This will include the hidden histories now often pushed to the outskirts of the city; the hopes and dreams of independent shop owners, landmarks connected to the LGBTQ communities, the musical hub around Hepworth Arcade, reflecting on sense of identity and belonging. Through microphones, Jez will also uncover the hidden sounds of the environment, including the invisible mesh of electronic signals and urban wildlife on the high street. Produced in association with Absolutely Cultured.
5. Great Yarmouth: Oliver Payne aims to capture the charm of enigmatic, contrasting and diverse Great Yarmouth. Creating an authentic portrait of the street, from stories of local people that have witnessed its changes or studied its rich history, alongside those who have recently made it their home or are not yet settled. These narratives are reflected in the sounds of the place itself, through the gentle resonance of a medieval row, to the loud and vibrant music heard from outside a barbershop. Produced in association with originalprojects and Norfolk & Norwich Festival.
6. Grantham: Sandra Kazlaukaite will incorporate a collage of aural histories, archives and local residents’ memories to tell a story about the histories of Grantham high street. It will explore this space of socialising and cultural exchange has transformed over time, and will question what has been forgotten during the process of change. Through conversations with local residents and historical research, the walk will aim to amplify the hidden, buried, the wonderful and the imagined – the local historical heritage that has and continues to serve as a (silent) symphony accompanying the sounds of the present. Produced in association with Emilie Nunn and South Kestevon District Council.

Historic England is unofficially ‘twinning’ towns, through a programme of creative commissions that see artists working with local people to uncover what they have in common.

The artworks will explore themes of identity as well as the communities’ collective hopes and challenges, culminating in a series of installations, performances and digital work.

Artists Kaozara Oyalowo (Leicester) and Jessica Scott (South Norwood) are connecting with communities around local launderettes. Their project Quiet Down There – Life through Laundry will result in a limited edition ‘zine’ published this July.

Artist Freya Gabie will be working with local people for her project All Fired Up! Her artist residency will take place in Stoke from 21 June-4 July and in Poole from 6-17th September, where she will conduct community ceramics workshops exploring both towns’ deep connection to the ceramics industry. Gabie will create a work for each town, which will respond to the stories she gathers. Each workshop participant will make a ceramic artwork, which will be exhibited on both high streets. After this, the artworks will be swapped between participants, so everyone will receive a unique ceramic to keep.

For her commission Street Dreams, artist Louise Fazackerley has already undertaken several creative writing workshops with communities in Wigan, and has more planned in Blackpool this May, with dance workshops planned for both towns this summer. The workshops will result in a dance-poetry film and animation underscored by a soundtrack of poetry and music to be released this July, and a documentary film of the project to be released in August.

Artist practice Mooch are working with students at Broadstairs College, Ramsgate and local residents for their project, Isle of Rydesgate, a fantasy town that twins Ramsgate in Kent and Ryde on the Isle of Wight.  In June, local people will be sent “craft kits” to decorate scale models of historic high street buildings, and from July to August there will be exhibitions of the model high streets in town centre shops in Ryde and Ramsgate.

For artists Ellie Shipman and Katy Hawkins’ project Public Announcements, the artists are conducting workshops in Bedford and Keynsham and working with residents to create High Street Observation Cards prompting local exploration and discussion of the High Streets alongside co-designed maps of each area. Banners will be created through community workshops of local knowledge of the High Streets, resulting in local parades this summer, and a shareable learning pack for others to benefit from.

As part of a major photography commission, Picturing England’s High Streets, six socially-engaged photographers-in-residence will be based with regional photography organisations over the coming years to chronicle our high streets. Coordinated by the photography organisation Photoworks, applications for the artist residencies are now open for Chester, Prescot, Coventry and Stoke (closing 26 May), with Tower Hamlets and Leicester to open for applications this summer. To apply, please visit: https://photoworks.org.uk/opportunities/